That warm and sweet flavor of cinnamon raisin bread in a scone! Cinnamon raisin scones are loaded with ground cinnamon, sweet raisins, then topped with a cinnamon nutmeg almond glaze. These would be a delicious treat with morning coffee, or add them to your next brunch menu!

For me there’s something almost nostalgic about the cinnamon raisin flavor combination. It’s comforting, inviting, and the perfect balance of warm and sweet. It’s not as sweet as a muffin, but certainly not as basic as a buttermilk biscuit. I mean, if there anyone that doesn’t like cinnamon raisin?!

And let’s talk about the beautiful aroma. My goodness, when something cinnamon raisin is baking it just fills the whole house with that calming home-baked smell. Which makes me think, I wonder if there’s a cinnamon raisin candle out there? That I’d buy!

I want you to absolutely love these scones when you make them, so here are a few helpful baking tips to help you along the way!

Butter temperature. In order to get the right scone texture the butter has to be cold, so no room temperature butter here!

Equipment. So now that we know we’re working with cold butter, you’ll need to cut it into the dry ingredients. While some people use a box grater to grate the butter, I prefer using a pastry cutter. Here is the pastry cutter I use!

Dough texture. So I’d say the dough is going to be a bit wetter than a cookie dough. If the dough is too dry and crumbly you can add an extra tablespoon of the sour cream to help add a bit more moisture.

Storage. No refrigeration needed! Just keep these in an air tight container on the counter for up to 3 days.

I love a good glaze for the perfect finishing bite…and just take a look at this gorgeous cascading glaze! I love this because I perfected a scone glaze that’s not too sweet, and is balanced with spices. For the glaze you’ll need:

See this isn’t just a sweet cinnamon glaze. The little surprise additions of the nutmeg and almond extract really create a flavor blend that help balance some of the sweetness from the scone and the raisins.

Searching for more scone recipes? Check out more scones here on the blog! 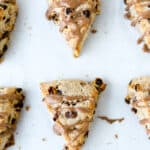 That warm and sweet flavor of cinnamon raisin bread in a scone! Cinnamon raisin scones are loaded with ground cinnamon, sweet raisins, then topped with a cinnamon almond glaze. These would be a delicious treat with morning coffee, or add them to your next brunch menu!

2. In a large bowl combine the flour, baking powder, baking soda, cinnamon, and salt. Using a pastry cutter, cut in the cubed butter. Last, pour in the raisins and stir so they’re incorporated evenly throughout the dry mix.

3. In a small bowl, gently combine the egg and sour cream.

4. Pour the egg mixture into the dry ingredients and stir to form the dough. If too dry and there’s too much dry ingredients that won’t work into the dough ball add an additional tablespoon of sour cream. Use your hands to fully incorporate everything together.

5. On a lightly floured surface press and gently knead the scone dough until you form an even flat disc about 7″ wide. Slice into 8 triangle scones.

7. While the scones are baking, combine all of the glaze ingredients in a small bowl.

8. Allow the scones to full cool before drizzling with the spiced glaze.

Don’t add more than the recommended amount of sour cream since it could make the dough too wet and sticky.