When you think of brunch drinks, what comes to mind first? I’m guessing you either said a Mimosa or a Bloody Mary, right? Well, I’m going to introduce you to the breakfast shot, and this French Toast flavored breakfast shot is going to be the new must-have brunch drink! This tastes just the classic breakfast dish but in a boozy form! This is the best way to kickoff your boozy brunch party!

When I decided to make a brunch shot that could be served at a breakfast or brunch party I was stuck between two choices. I couldn’t decide if I wanted to make a coffee inspired shot of a French Toast inspired shot. To me, those are two classic breakfast items

So, how did I solve my problem? I turned to my followers on Instagram! Polling my followers is a great way to get insight into what people really want in a recipe. I made a poll and let people know I was trying to decide between a coffee or a French Toast shot…and the overwhelming response was for the French Toast!

So here we are! Aside from the taste, the best thing about these shots is that they’re easy to make and there’s no special techniques! Just shake all of the ingredients over ice, then pour into your caramel drizzled shot glass. Done!

Let’s talk about what you’ll need from your liquor cabinet to whip this up.

When I knew that I was going to make a French Toast inspired shot that would be perfect for brunch parties, I came up with this recipe by modeling it after the actual ingredients you’d use to make French Toast. After all, I want this to really taste like the real thing!

So I knew I needed a few important things. I needed a hearty liquor that could be the base for the shot. Then, I needed to be able to incorporate the flavors of the melted butter, syrup, cinnamon and the dash of vanilla that you’d have in the batter that you’d dredge the bread in before adding it to the pan.

Then, on a Friday night I enlisted the help of my husband to do the taste test with me. Trust me, he didn’t mind. I had my flavor profile that I knew I wanted to shine, and I made 4 different shots with little tweaks. We tasted each one, and voted on our favorite. Luckily, we both chose the same one as the clear winner!

The main differences in this shot recipe that I’m sharing here compared to the ones we didn’t like as much is that this shot uses real cinnamon throughout the shot, not cinnamon whiskey and not just sprinkled on top. We tried one with cinnamon whiskey, and it was overpowering cinnamon flavor neither of us could finish it. And, in addition to a little vanilla vodka this uses a dash of the vanilla extract. This helps bring through that authentic French Toast taste.

The ingredient list looked pretty easy, right? So let’s talk about the method for making this.

You may have noticed in cocktail and shot recipes the portions are referred to as “parts”. A part isn’t an exact form a measurement and more loosely is referring to the amounts or ratios of the ingredient in relation to the other ingredients. If something says 1 part vodka and 1 part orange juice, you’ll know this means use equal amounts of vodka and orange juice. Now, 1 part could be the size of a shot, or it could be something larger depending on the size of the drink you’re making. If you want to read a little more about mixology and drink measurements, check out this article on The Spruce Eats about it.

For the sake of this recipe, I thought it would be helpful to show you what I used to measure my ingredients so you know my reference point of a “part”. I also included exact measurement of each ingredient. If you’re like me, I really appreciate exactness in recipes and I think it’s important so you can replicate this shot exactly as I made it!

So this little guy here is called a jigger. You’ve got the large size with is 2oz, and the smaller size is 1oz. I used the small 1oz size for this shot.

Shake all over ice then pour into a caramel drizzled shot glass. If I were using the “part” method of writing this I would write it as 1 part Irish Cream Liquor, 1 part Butterscotch Schnapps, 1/2 part Vanilla Vodka, 1/4 teaspoon vanilla extract and several dashes of ground cinnamon.

So this is what I used. You’ve got the large size with is 2oz, and the smaller size is 1oz. I used the small 1oz size for this shot.

Add 4-5 cubes of ice to your shaker, pour in all of the ingredients and shake well. Drizzle each shot glass with caramel syrup, then pour in the shot. If I were using the “part” method of writing this I would write it as 1 part Irish Cream Liquor, 1 part Butterscotch Schnapps, 1/2 part Vanilla Vodka, 1/4 teaspoon vanilla extract and several dashes of ground cinnamon.

So, let me know….are you going to be making this French Toast shot at your next brunch? Turn up your brunch or breakfast gathering and don’t eat the French Toast, drink it!

Here are some items you might want to make for your brunch:
Sweet Potato Home Fries
Copycat Panera Orange Scones 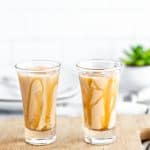 Add a surprise to your next brunch gathering with these breakfast French Toast Shots. A fun and whimsical treat and a nice change from the traditional mimosa or Bloody Mary. These are packed will all the classic flavors of French Toast, in a fun boozy form!

1. Prepare your shot glasses by drizzling each with caramel sauce all around the inside of each glass.

3. Shake everything vigorously, then pour into the prepared shot glasses. Enjoy responsibly!