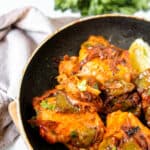 Sazon chicken is a flavorfully seasoned bone-in chicken thigh recipe! Seasoned with an easy homemade spice blend and marinated in juices make this bursting with citrus and spiced flavor. Everything cooks up in one pan!

2. Remove the skin from the bone-in chicken thighs and place chicken in a large bowl. Season with 3 teaspoons of the homemade sazon and the 1/2 teaspoon of garlic powder, making sure to season both sides of the chicken. Pour in the homemade marinade and the sour orange marinade.

2. In a medium pan heat 1 cup of water to boiling. Add in the seasoned chicken thighs and pour in all the marinade from the bowl as well, sprinkle the tops of the chicken with the 1/8 teaspoon of chicken bouillon. Reduce heat to low and cover.  Simmer covered for 30 minutes.

3. While the chicken simmers, slice the red onions into thin slices, chop about 3/4 of the green pepper into pieces about an inch big, and cut the lime into wedges.

4. After the chicken has simmered for 30 minutes, flip each thigh so it is now face-down and increase heat to medium. Cover and continue to cook for 15 minutes.

5. After 15 minutes, remove the cover and increase heat to high to create a boil and flip chicken so it is now face up again. Add in the red onions and the peppers. At this point, you are cooking off all the liquid in the pan. Cook for 10 minutes then remove the chicken, chicken should have in internal temp of 165. Cook the  peppers and onions for another 10 minutes at medium high heat to caramelize them. You may need to carefully spoon out any excess oil. As the peppers and onions stick to the pan, occasionally add 1-2 tablespoons of water to deglaze the pan and allow the onions to caramelize even more. If anything is burning, reduce heat to medium.

Serve the chicken topped with the peppers and onions and extra lime wedges!