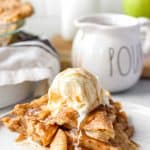 Thin sliced apples apple pie is a delicious twist on the classic apple pie. Each bite is a thick stack of apples drenched in cinnamon, nutmeg, and sugar. A flaky top crust sprinkled with cinnamon and sugar. Serve warm with ice cream.

1. Heat the oven to 450 degrees. Line the bottom of a 9-inch pie plate with the first pie crust, prick the bottom several times with a fork.

2. In a large bowl, mix the peeled and thin sliced apple slices, the white sugar, and brown sugar. Let sit for 20-25 minutes to allow some of juices to pool in the bottom of the bowl. After the apples have rested, remove the apples to another large bowl, and save the excess juices to make the sauce.

3. In a separate smaller bowl, mix the cornstarch, salt, cinnamon, and nutmeg then pour into apples bowl and stir to combine. Spoon the apple mix into into pie late that’s been lined with the first pie crust. I say spoon them in because more juices will have pooled in the bottom of this bowl and we don’t want to pour that into the pie crust. Sprinkle 1 tablespoon of cubed butter over top the apples.

4. Top the apple mixture with the remaining pie crust, press the edges of the top and bottom crust together all along the pie plate. You can make a decorate edge or use a fork to seal. Lightly brush the top crust with the milk. Then take additional white sugar and cinnamon and generously sprinkle over the crust. Lastly, cut several vent holes in top. Make them wider than just a slit, you need to let the steam vent out.

4. Bake at 450 for 10 minutes. Then reduce heat to 350 and bake 40 minutes. Let pie cool before slicing, rewarm the pie in the oven or place slices in the microwave for warm apple pie.

5. While the pie is baking you can prepare the apple juice sauce. Pour all of your extra juices into a small put and add the tablespoons of cornstarch and the cinnamon and nutmeg. Bring to a boil, then reduce to simmer about 5 minutes. Pour into a bowl or jar, spoon over pie with vanilla ice cream!

It’s important to let the apples rest for the 20-25 minutes. This will really prevent the runny pie. There’s still plenty of sugar and sweet in the pie even with these juices removed.

The apple juice sauce is optional, but a great way to use the juices and not discard them! It doesn’t get very thick, don’t add more corn starch or it will start tasting chalky. Chill in the fridge to make it thicker.

The recipe for the pie was from the Joy of Baking.